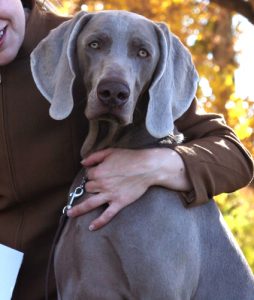 This week, we are featuring Gunnie, Ch.Foxfire’s Bohemian Rhapsody, BROM (AM/Can/NZ Ch.Win’Weim Rio Grande x Ch.Foxfire’s Platinum Evanesence). Gunnie’s happily retired at 9 1/2 years old. His passtimes are throwing my elbow up at the kitchen table and playing checkers with the cat next door. If you are missing shoes, they are likely in his crate. His nickname is Gooberbuns, which sums up his personality. Gunnie is a BROM sire with 10 champions and other titled get. He is also the grand sire of 11 champions and counting! We have a little bit of Gunnie stored away and are hoping to have puppies with him sometime soon.

Gunnie’s get here at Foxfire include:

For a full list of Gunnie’s titled get and their awards, visit http://www.wcaadmin.com/bromuser.aspx.