This is a long entry for me. I realize that not many people stick with things past the third paragraph. Give it a shot though, I have a lot to say.

On Jan. 7 of this year I received an e-mail from Dr.Duncan, a scientist we’ve worked with for many years. I think it is 12 years, maybe 8. I can’t remember exactly. His studies included identifying the genes leading to hypomylenation in Weimaraners. Having experienced the disorder in our lines, we’d sent DNA to his study.

If you felt you were shorted in the “science brain” department, you probably were. Whatever you missed out on was given to Dr. Duncan. He has put it to good use. I could write a 30 page history paper in less than a week in college, and get an A+. I was always unimpressed with myself. I knew it wouldn’t change the world.  I wished I could have been a scientist but the math requirements were too rigorous for my bodacious-journaling brain.

Dr. Duncan studied hypomylenation in Weimaraners for a specific reason. Hypomylenation involves either the regeneration or late generation of the myelin sheath on the end of nerves. In Weimaraner babies, when this happens, it causes intention tremors. These tremors lessen to normalcy or almost normalcy by full adulthood. The scientific benefits for studying this as it relates to human nerve disorders is obvious.

“Novel mutations in myelin and myelin-associated genes have provided important information on oligodendrocytes and myelin and the effects of their disruption on the normal developmental process of myelination of the central nervous system (CNS). We report here a mutation in the folliculin-interacting protein 2 (FNIP2) gene in the Weimaraner dog that results in hypomyelination of the brain and a tract-specific myelin defect in the spinal cord. This myelination disruption results in a notable tremor syndrome from which affected dogs recover with time.”

As a Weimaraner breeder, our trade-off for contributing DNA would be a bench test identifying dogs who are carriers. Some breeders also donated euthanized affected puppies to the study. We were never able to make that sacrifice, knowing the majority of them would go on to have normal lives.  However, I have a lot of respect for their decision. Discovering you have shaky puppies is difficult enough without also making the decision to euthanize and donate them.

Our first shaky puppy happened in our first litter in 1997. We had them off and on periodically through the years. We were naive at first. We though the issue stemmed from a nutritional deficiency during pregnancy. After a few phone calls, a long time breeder explained the situation to me. Not a lot was known about it.

We steadfastly outcrossed to other genetics, believing that if it was a common recessive trait, we would breed away from the problem. It worked, sometimes. Even with breeding completely unrelated dogs, there is still a down-the-line lottery effect for inheritance.

I am sure some of my breeder friends are already fidgeting in their chairs. It’s difficult to talk about risks you take when you put purebred dogs together. The fact is this: Any two dogs you breed together can create any number of 12 genetic problems existing in all dogs.  If you’ve bred dogs long enough, you realize the genetic bite on the ass is going to come in the form of something you never saw coming, the thing you couldn’t conceive of, or even test for.

We moved forward with our breeding program even with the risk we’d get shakies. Dr. Duncan asked me why I bred these dogs when I knew the syndrome it was a possibility. I remember the perfunctory pause in our phone conversation when I said, “My dogs have a low incidence of HOD, immune problems, allergies and a low incidence of bloat compared to what I’ve heard others’ talk about. At least with shaky puppy, we know they are affected. It is a difficult realization, but we know what it is. It doesn’t randomly sneak up on you when your dog is 12 weeks old, or 5 years old, or later.”

I wouldn’t pretend it is a perfect argument. I always felt if we eliminated every dog who could “potentially” produce the problem, we’d only be inviting some other issue into our line that you couldn’t put a checkbox next to.  Entire breeds have nearly met their ruin by conscientious breeders on a witch hunt to eliminate all carriers of a problem out of the entirety of a gene pool.

We donated DNA from generations of carriers, and thankfully, DNA from shaky puppies we’d placed in loving homes. I am grateful to those individuals who took the time to send DNA to the study only at the encouragement of their nutty dog breeder.

Through funding issues and other set-backs, Dr. Duncan and other researchers still moved forward with their studies. I had, in my mind, given up on the idea that a bench test would be a possibility in the near future. It didn’t seem like they needed very much money to finish their research, but it was more than I had free to donate. I thought about them from time-to-time and soon five years had passed.

Jan.7 was a Tuesday morning. Dr. Duncan’s e-mail was concise. He let me know the test for hypomylenation was available. He also let me know that this was the final correspondence concerning the study.

I was ecstatic. I read all of the websites and the formal scientific paper they released on the years of research they put into identifying the DNA marker. It is several pages of great information. If you’d like to read it, click here to download the PDF. It is 1.1 MB.

The most outstanding part for me was the acknowledgements section which mentions my name specifically. I don’t point this out as a measure of ego, but as a measure of humility. My dogs and I had the opportunity to make a difference.  The frustrations we felt and the dogs who struggled made a real contribution. There are a lot of people who helped, but we did have a little part in finding an answer.

The next task was to start testing my dogs. The first one out the door was Gunnie. He has 49 puppies that exist between litters we’ve had with him, and what other breeders have produced using him as a stud. He came back N/N (carrier/affected negative). Gunnie had a 25% chance of being a carrier which is enough of a chance not to take it for granted that he came back N/N.

After all of my tests came back, I had a rude shock.  The sire and dam combination we bred on 12/25/13 and 12/27/13 was between two carriers. Ducky had a 50% chance of being a carrier. Uma definitely was not expected to be a carrier. I hoped that maybe she wasn’t pregnant. I knew she likely was.

If I charged past you in the hallway at work after I found out about Uma’s carrier status, just be glad I didn’t barf on you. The irony was so thick for me in that moment, you could have cut it with a knife. I had a pregnant dog who had shaky puppies. Statistically there’s a small possibility that none would show up, but it isn’t likely we would be so lucky. The sun doesn’t shine on recessive genetic issues that way.

I knew we would get shaky puppies, and indeed we have. Three of my six beautiful girls are affected and one boy. 50% of the litter. You may offer the advice that I could have spayed Uma when I found out this news. I am not strong enough to do that to a litter of puppies. I realize it happens every day, but they’re my dogs, even before they’re born.  You may judge me accordingly.

The bobbles appeared in a pronounced way on day 11 of their life.  The only consolation to be found is that they are they are the very last ones, ever. My mind has gone over the “what-if” scenarios as far as the timing is concerned. But they’re living things and there are no guarantees for them, or me, or any of us, that perfection can be achieved.  If there is a lesson or a take-away from the situation, let it be that you should never take it for granted that your dog isn’t a carrier. Even though only 4% +/- of the Weimaraner breed are carriers, knowing is ultimately better than being surprised.

Being a carrier is not the end of the world. It gives breeders a chance to know what the next step is in finding the right girlfriend or boyfriend for their dog. Irish Setter breeders have virtually eliminated progressive retinal atrophy from their breed with this scenario. Don’t breed carrier dogs to each other, and your problem will solve itself in three generations.

Mac’s results came back as a carrier. It was almost as much of a surprise as Uma coming back as a carrier. At least we know. I have to make sure his girlfriends are not carriers. This is the gift that was meant for those who helped with the study, or have the issue in their line. I intend to use that knowledge with the spirit for which it was intended. We had planned on breeding Mac to Piper, who also turned out to be a carrier. While it disappoints me we can no longer breed the two, it is truly empowering to have this knowledge.  Both of them will be bred to worthy mates who are not carriers.

I still feel sick. My four little pups have a bouncy and bobbling road ahead of them. Another breeder friend of mine reminded me that we are probably the most knowledgeable people available to take care of them, and get them what they need. They need love, food, understanding, and to be treated like healthy strong dogs. In their minds, they don’t really see a handicap. It is only painful for us to watch and keep our fingers crossed that the journey to normalcy will be quick. 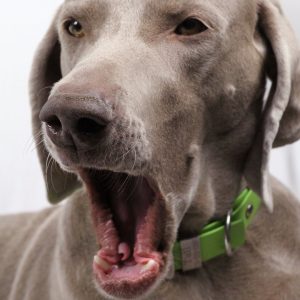