June has been a super-busy month. It’s the 23rd and I could have written a blog entry for every week of this month. I’ll keep it condensed so you’re not totally bored by the end.

The first weekend of the month was the Flatirons Kennel Club dog show in Longmont, Colo. It’s always at the Boulder County Fairgrounds. I like this venue and wish all of the shows in Greeley would move over there. I can hear all of the Colorado dog-show community bursting into laughter (like that’s EVER going to happen…).

I hadn’t planned on entering the puppies and thought I might just take a break after doing so well in Albuquerque last month. They offered puppy classes for $15 though so I entered Bones and Hannah. It’s cheap practice even with a little gas money. Bones ended up taking Best of Winners for a 4 point major on Sat. and picked up 1 point on Sunday. Hannah won her class both days. Greg’s Winnie also picked up a reserve win on Sat. A long story short, I am glad I went!

Bones made the most of his success by snarfing a bunch of pine buds in Tim’s backyard Saturday night. He was a poopy puppy for about a week. By Sunday morning he had projectile diarrhea. I forgot that little boys’ systems seem to be much more sensitive than little girls.  Pumpkin flakes, forti-flora and bio-sponge – they’re real things.  Sorry about the polluted grass, hon…

Here’s a little applause for Lillian and Rowdy… Somewhere in all of this I took Bones, Samantha and Hannah in for OFA preliminaries. All three of them were OFA preliminary excellent. Dr. Morgan called me himself, he was so excited that all three of the puppies received an excellent rating.

All of the girls decided to come into season the last week of May, including Lillian who we planned on breeding. We drove up to Fort Collins on the 17th for a trans-cervical artificial insemination after three progesterone tests over the course of the week. Lillian was very good for the procedure, which is kind of invasive if you can imagine it.  They go in with a 24” scope, pumping the dog full of air along the way. She was very patient. We bred her to a dog named Dylan. The combination is similar to what made famous Frankie. We’ll have more about this breeding when Lillian’s confirmed pregnant, or you can see our puppies page. Meanwhile, keep your fingers crossed. I am looking for a serious show home for a female from this litter, think about it.

Of course Lillian could always have 10 again, but let’s not take that for granted! We should know if she conceived by mid-July.

Because I like to run around like a crazy woman (insert sarcasm font here), we went back up to Cobb Lake, near Fort Collins on the 18th for the Weimaraner Club of America ratings test. The Mile High Weimaraner Club only has ratings once a year, or sometimes every-other year. I was a little bummed we couldn’t enter Samantha and Frankie, both were in season. It was hot out there at Cobb Lake, but amazingly bug free for the most part. We had a breeze that changed directions so at least it wasn’t dead-still close to the ground. The water was also pretty clear, or so I’ve been told.

We got to see Sabine, Bones and Hannah’s litter mate. Special thanks to Susanne, Jeff and Jake for coming down from S.D. with her, and running in our ratings test. It was great to visit and see this little girl! Sabine is Foxfire’s Speed Queen Of Angenehm. Also thanks to Jeff for all of his help during the retrieving ratings!

Brock, Foxfire’s Going For Broke, passed the AKC water test and showed what a capable swimmer he is, we were all impressed! Sandy Jordan is doing a great job training her boy, he also has two JH legs.

Bones, Foxfire’s The Real McCoy, also passed his NSD qualification at 8 1/2 mos. I was very proud of my baby boy who winded a bird about 25’ out in difficult conditions for an inexperienced dog. I’d like to see him swim as nicely as Brock, but we have some work to do!

George took plenty of photos. Here are photos of Brock during the AKC water test below. You can see more photos on the MHWC Facebook Page. Congratulations to everyone who earned new titles at the ratings test! Also thanks to The Mile High Weimaraner Club for hosting ratings, and judges Tim Bintner and Tad Walden, and our gunner Cindy Heydinger. 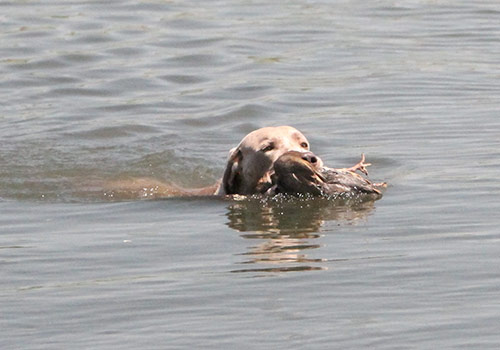 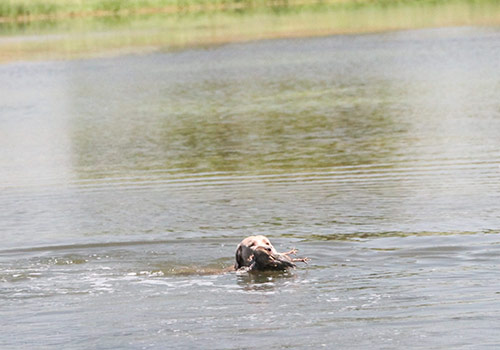 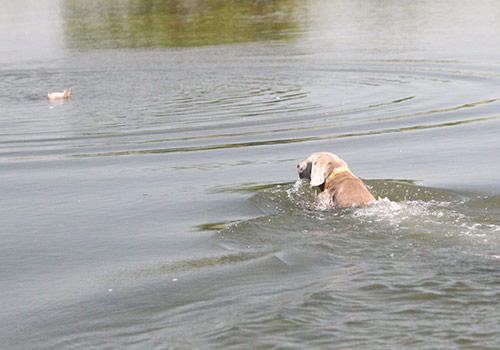 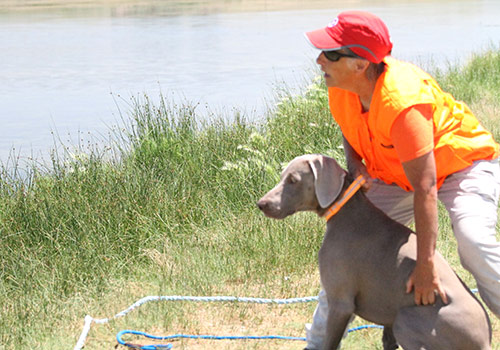